2017 June photos for week of the 5th to the 9th by Author Scot Fin. Full size slideshow at the bottom of this post. 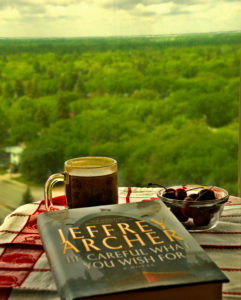 Back to the books, with a cup of coffee, and a thought that I better keep a better watch on my bookshelves. This Jeffrey Archer book is a recent purchase of mine. It was on sale and I remember hearing some good things about this author so I decided to try a new author … again. It seems my bookshelf already has an unread Jeffrey Archer book on it, either by magic or I had already made this new author decision. While I’m obviously getting old, fortunately the bookshelf book was a different title. 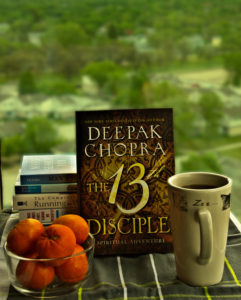 Since I wrote ‘An Astral Adventure,’ Deepak Chopra’s ‘A Spiritual Adventure’ caught my eye. Blending together fiction and imagination with some spiritual ideas seems like a good idea. From what I understand, Deepak Chopra would be suited to this. We’ll see, after some coffee (and a few other books on my reading list).

Superfoods at Every Meal

Superfoods with some super wine, a hard day in front of the oven. Well a hard day taking a picture in front of the oven and that’s about the extent of my relationship with the oven. In addition to some healthy meals in this book, there are also dessert recipes to make, well, for my wife to make. But I’ll be there for support … with a bottle of wine; I’ll even share.

It is later in the week so I need my coffee in strong shots. And I thought I would add a Robert Ludlum character series other than Jason Bourne to my library. This is another series that has continued after his death. I, however, still have to add some more Ludlum books to the library that were actually written by Mr. Ludlum. While I’ve enjoyed Bourne books post Ludlum, the first three, written by him, were still the best so I need to read more written by Ludlum, Ludlum books.

And don’t get me started on the Bourne movies. Oh, too late. Actually I did enjoy the first three movies that were based on the books Ludlum wrote himself. Probably the good thing there is when they say based, that is a very loose term. After the very beginning of the first movie, the movie and the books are totally different. Books, however, are still better but, maybe because they are so different stories, the movies hold their own. 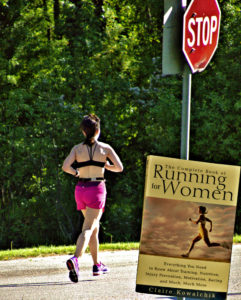 I tried to get her to stop but my wife was sticking to the book. Or was it something I said.

Jeffrey Archer - Be Careful What You Wish For

Superfoods at Every Meal by Kelly Pfeiffer

Kat running past stop sign in a 10km running event